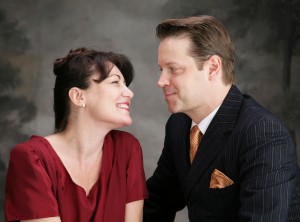 With my wife Alison J. Murphy; recent performances together include ZELDA & SCOTT and our LUNT AND FONTANNE project, in NJ, NYC and Texas!

My wife Alison J. Murphy and I have been performing together in multiple stage projects for many years now: ZELDA & SCOTT: A Life Affair is an exciting new play based on the lives of Mr. & Mrs. F. Scott Fitzgerald, using their own rich and brilliant correspondence, which recently played successfully in New Jersey and as a 2018 benefit performance in NYC.

Our other theater project, LUNT AND FONTANNE: The Celestials of Broadway, is a retrospective of the incredible lives and careers of Alfred Lunt and Lynn Fontanne, the premier theatrical duo of the 20th Century. Under the guidance of director Owen Thompson, we have had three productions: two in New York City (including the New York International Fringe Festival) and one at the Classic Theatre in San Antonio, Texas. 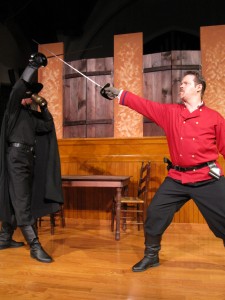 Trying to keep up with Zorro (Jed Peterson) in the ELTC production of ZORRO!

We have also been busy with other projects.  The East Lynne Theater Co. in scenic Cape May, NJ has been a home base for many years: the summer of 2017 brought performances of Eugene O’Neill‘s nostalgic comedy AH, WILDERNESS!, and Mark also performed in recent productions of BIOGRAPHY and ZORRO!, directed by Gayle Stahlhuth.

My corporate training work, primarily with the Leadership-Masters company, has included innovative leadership events based on the stories of subjects such as polar explorer Ernest Shackleton, Winston Churchill, Queen Elizabeth I, and (recently) Mohandas K. Gandhi, for such clients as State Farm, 3M, GE, Booz Allen and Boeing.  That work recently brought me to Puerto Rico (on a job for the Coca-Cola company), as well as an unexpected but exciting sojourn to Dar Es Salaam, Tanzania.  Our Nelson Mandela leadership piece was booked by an NGO working in East Africa, and our Leadership-Masters team greatly enjoyed the wonderful people and beauty of the Indian Ocean, as well as the important work being done by our client, Open Society.  Other great trips were to Penang, Malaysia, in a corporate training gig for the Dell Computer company, and a 2018 sojourn to Copenhagen, Denmark, for Novo Nordisk, where we had two presentations, including The Shackleton Experience.

All the best,
– Mark